Important information about the COVID-19 from Palmetto Exterminators & Mosquito Control

Inquire Today about our Services

What are and what to do if you see swarmers 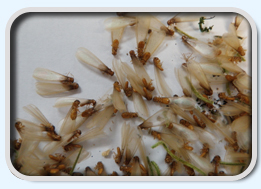 Mature Formosan Termite Colonies produce swarmers that fly out of colonies by the thousands. There could be 70,000+ in any given evening flying towards lights in and around homes. As locals we consider swarming part of the “charm” of living in the Lowcountry, but many residents not originally from this area are not familiar with this event. Many people mistake these “hovering clouds” of swarmers for gnats or other flying insects.

Termite swarmers have no biting or chewing mouthparts and do not cause any damage to your home. Their goal is to start new colonies in and around your home which in turn can cause damage. If you find swarmers in your home, do not panic.  However, you should immediately call a licensed and trained expert, with experience in handling Formosan infestations, to inspect and verify the source of the swarmers. The source is either 1) An infestation in your home or 2) Significant termite activity close to your home including inside trees. Formosan termites have been identified as infesting at least 17 different tree species.

Historically, greater than 95% of the termite swarmers we find inside homes originated from outside of the home and not from an infestation in the home. However, this should not make you feel secure or take swarmers lightly.  It is not “if” but “when” you will have an infestation in the Lowcountry.  In fact, you could have a hidden infestation in your home doing damage for several years before it is discovered.  Formosan termites have the ability to cause thousands of dollars in damage in just a few months. This is not a risk a homeowner can afford to take.  It is possible the Formosan termite is causing as much as 75 to 100 million dollars in damage to structures in the Lowcountry each year.

On average this is more than storms and fires combined. Keep your home protected by a reputable termite company that has experience with and covers Formosan Termites. Stay aware this Formosan swarm season.

The manner in which Palmetto Exterminators & Mosquito Control has provided in service and help is outstanding in my book. The polite and efficient manner that your company has serviced our home is OUTSTANDING and I thank you. I would not hesitate in recommending in your company to anyone, which is something I do in a very selected manner.