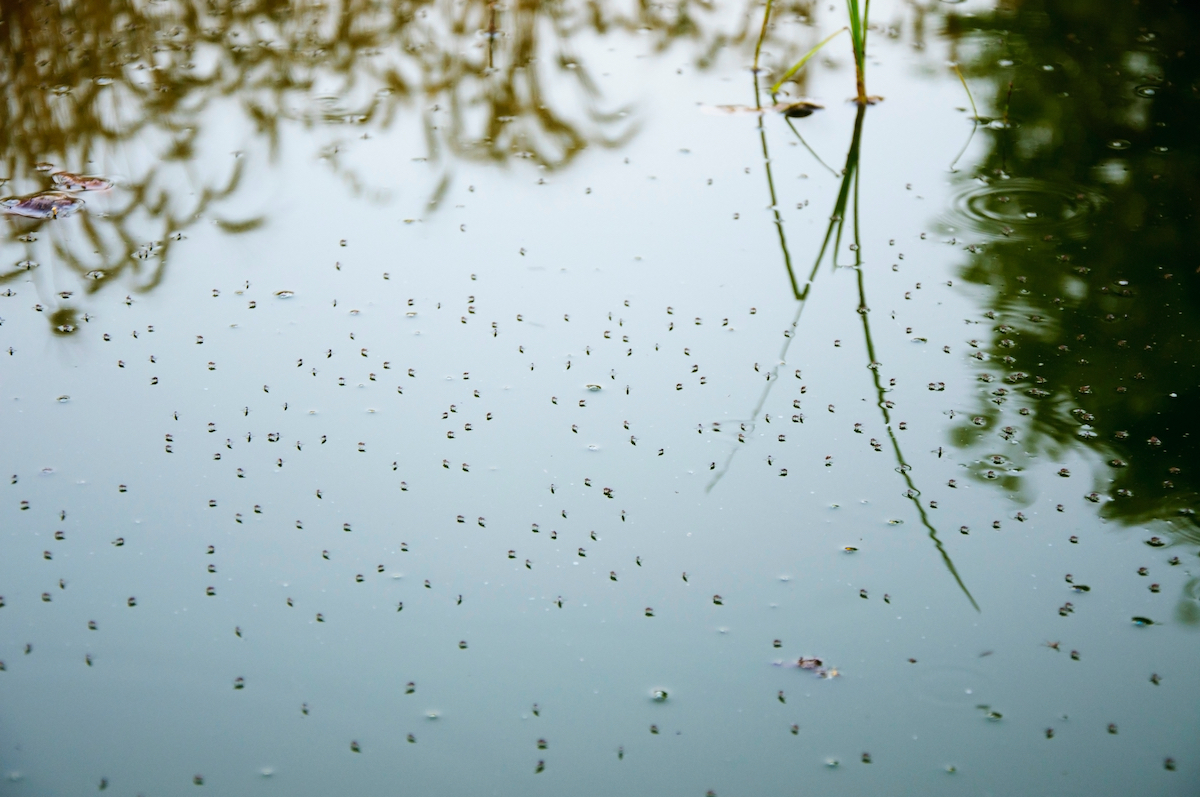 Mosquitoes and gnats are among the many pests whose presence often goes undetected until it’s too late. Where there are mosquitoes, there are itchy, swollen bites left behind as evidence. But how can you fight off a pest you rarely even see, let alone feel? In order to have an effective mosquito control plan in place, you have to know exactly who your enemy is! Our local mosquito exterminators are giving you the buzz on the most common mosquito species in the southeast region so that you can be prepared when peak season rolls around this spring!

Nothing can ruin a nice evening outside quite like the constant buzzing and biting of mosquitoes. Yet, there are more than 184 species of mosquitoes that call our region home, with 61 residing in South Carolina, 60 in North Carolina, and 63 in Georgia. With this in mind, it is important to familiarize yourself with a few of the most common species, so that you can better understand exactly who you are trying to ward off during the upcoming mosquito season.

Aedes aegypti, more commonly referred to as the yellow fever mosquito, is a species of mosquito that has been in existence for centuries. Originating in Africa, this species was brought over to North America on ships used in early European exploration. Though its population has declined in recent years, this species is still prevalent in temperate, tropical, and subtropical climates. The Aedes aegypti species thrives in urbanized areas, making them a common nuisance for homeowners. They often take shelter in shaded containers with standing water, such as flower pots, baby pools, ditches, and other places with poor drainage.

Yellow fever mosquitoes have a unique appearance, as their distinctive silvery-white scales form bands on their legs and a U-shaped pattern on their abdomen and thorax that resembles a lyre. (What is a “lyre” you might ask? It’s a small harp-like instrument used by ancient Greek musicians). As far as mosquitoes go, these are certainly one of the most interesting species. Though these mosquitoes might be interesting to look at, they are certainly dangerous. As its name suggests, it is a well-known spreader of Dengue Fever, Chikungunya, Zika, Mayaro, and Yellow Fever viruses. An interesting fact: the University of Florida reported that this species resulted in the casualties of more U.S. troops than the Spanish War itself.

Asian tiger mosquitoes, known as Aedes albopictus, is another species commonly found along the East Coast. Also known as forest mosquitoes, these pests are native to the tropical and subtropical climates found in Southeast Asia, however, they have spread to many countries, including 25 states in the U.S, through international commerce and travel. Asian forest mosquitoes have silvery white stripes on their legs and one from their heads down to the center of their backs. Male Asian tiger mosquitoes have fuzzier antennae for detection of the females’ buzzing.

The News & Observer reported that this species was voted “Most Likely to Ruin a Barbeque,” as they are very active (and aggressive) day-time biting insects. [Fun Fact: Only female mosquitoes bite!] And unfortunately, in warmer regions, they usually remain active year-round. They do hibernate in the winter in cooler climates, though. If you happen to spot this species in your backyard, they are most likely there to stay – that is, without the help of your local mosquito control. Typically, Asian tiger mosquitoes only travel less than half a mile from their breeding grounds. This species is known for transmitting diseases such as Eastern Equine Encephalitis (EEE), West Nile virus, Dengue fever, and is a primary carrier of Chikungunya.

Anopheles quadrimaculatus, a.k.a “Quads”, are prevalent in rural Southern farmland, especially rice fields where they are known to breed. This is because female Anopheles mosquitoes lay their eggs individually on the surface of reservoirs of freshwater bodies, preferring ponds, rivers, and lakes surrounded by thick vegetation. The Anopheles quadrimaculatus species is one that sticks together, and can often be found in vast numbers. They are typically most active in the evening hours.

Quadrimaculatus, the Latin word for “four-spotted”, comes from the scaly pattern on their wings which creates four distinct patches that can be seen with the naked eye. Interestingly, genetic studies have proven that quads are not just one species, but actually a complex of five, genetically different species. They have one classification because they can’t be distinguished when looking at appearance. However, these 5 “sibling” species can be differentiated based on four factors: enzyme electrophoresis, polytene chromosome analysis, DNA restriction patterns, and egg morphology. Anopheles quadrimaculatus is sometimes referred to as the common malaria mosquito, as it is one of the most important species in the eastern U.S. when it comes to malaria transmission. However, they are known to commonly transmit the West Nile virus and heartworms.

Ah, Culex fatigans – the southern house mosquito. Culex quinquefasciatus is one of the most prevalent mosquito types in the US, with its name coming from its fondness of finding homes to rest in at night. These medium-sized mosquitoes can be identified by their pale brown color, golden scales, and white stripes. Southern house mosquitoes are, of course, most commonly found in or around your home, oftentimes in dirty, standing water that has been collected in some sort of container. This species is an opportunistic night-time feeder, so they are most active during dawn and dusk.

Although its main target has been birds, the southern house mosquito has been more frequently feeding on humans and other mammals. It is considered a bridge vector, or carrier, of viruses between birds and mammals. Diseases most commonly carried by this species include lymphatic filariasis, avian malaria, St. Louis Encephalitis, Western Equine Encephalitis, and Zika. Culex quinquefasciatus is one of the principal vectors of the West Nile virus.

The “winter” mosquito or Culiseta inornata, most commonly found throughout Georgia, is most active during the colder months, unlike many other species. Though adult female Inornata mosquitoes, they are most active in the fall, after the first rains of the season. Females typically rest during the summer. Male mosquitoes, on the other hand, typically cannot survive year-round. Also known as the unadorned American cool mosquito for its lack of banding, this mosquito appears speckled brown with white scales. It can be identified by its larger size, typically measuring to about half an inch in size!

The winter marsh mosquito is commonly found in pools, ditches, ponds, salt marshes, and canals. They frequently create pest problems in domestic, industrial, and agricultural settings, especially when found in large numbers. Their numbers are usually high in the early spring, as the species can produce many generations in just one season. Female Cs. Inornata feed almost exclusively on horses and ruminants, including deer and cows, but have been known to feed on birds, people, and other animals. They are fierce night-biters, which can be especially bothersome to livestock. This species isn’t a particularly dangerous health threat, as there are not currently any known mosquito-borne diseases linked to the species. However, its tendency to feed on horses does make it more prone to carrying encephalitis-type illnesses.

Regardless of the species, mosquitoes can be a terrible nuisance to people, pets, and livestock. In addition to being bothersome while trying to enjoy the outdoors, mosquitoes can pose a significant health risk as vectors of a variety of mosquito-borne illnesses. Because they typically congregate in large numbers, it can be difficult to address the problem at its source.

Though mosquito and gnat control can seem like a daunting task, with the help of our experienced mosquito exterminators, it doesn’t have to be. Palmetto Exterminators offers several treatment options for mosquito and gnat control that can be customized to meet your specific needs, including our mosquito misting system, mosquito barrier treatment, special event mosquito treatment, and neighborhood mosquito programs. We proudly offer Green Solutions for your outdoor living space that are organic and biodegradable, as well. It’s time to enjoy the outdoors again. To find a mosquito control solution that works for you, call Palmetto Exterminators and Mosquito Control today!

Palmetto Mosquito Control is a wonderful company to work with. I can’t say enough nice things about Derek and his crews. These guys are the most knowledgeable, honest a fair in the industry.